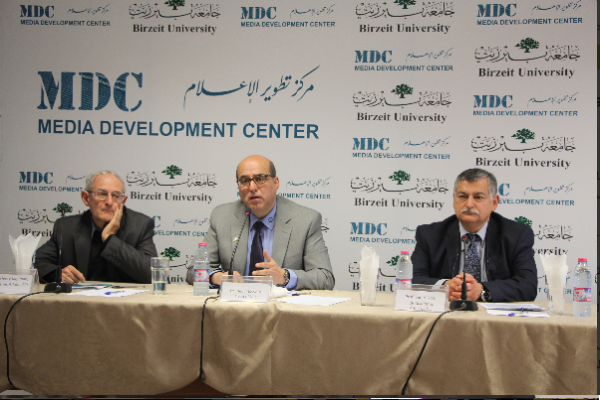 In his opening speech; Prof. Giacaman said that Birzeit University seeks to focus on the knowledge triangle based on combining education, scientific research and community service through supporting the University research centers, emphasizing the university’s willingness to cooperate with sister universities to develop researches that will contribute to linking universities with the labor market in a more effective way. Prof. Samir Al-Najdi mentioned that QOU interest in the development issue is not limited to education, but also it includes taking part in solving many of the problems of the community of the universities and pointed out that QOU is aware of the importance of establishing Scientific Research Centers referring to establishing (4) scientific research centers , some of which has been in operation while others are still under construction. He also mentioned that the University publishes (5) scientific refereed journals, which are classified internationally and have ISSN for paper and electronic publishing and one of them has Arab Impact Factor. QOU also,annually, publishes around (25) books and scientific researches prepared by faculty members of the university in addition to supporting (12) research projects at a rate of (5) thousand JDs for each . The University also organizes (35) scientific seminars and workshops and (5) scientific refereed conferences annually, including international ones. It is worth mentionaning that QOU won many international scientific and research awards, and recently won the Socrates International Award for the year 2017 as the leading university in science and education while its President,Prof. Younis Amr, won the Medallion of the Best Manager in the region for the year 2017.

Following the opening session, several scientific sessions were held. During the first session which was chaired by Dr. Talal Shahwan, Dean of the Faculty of Graduate Studies at BZU; Dr. Eng. Yousef Sabah, The Project Coordinator at Al-Quds Open University, presented the work progress in the capacity-building project of the Economic and Administrative Research Center. Prof. Diab Jarrar from Al Quds Open University also talked about the strategic plan of the Center for Administrative and Economic Research, while Mr. Omar Omran, the Project Coordinator at BZU, reviewed the work progress of the project. Dr. Suhail Sultan from Birzeit University talked about the strategic plan of the Center. A session chaired by Dr. Anton Sabila from Birzeit University discussed the scientific research in management and economics, and the interests of research groups.

The closing session was chaired by Prof. Husni Awad, presented the recommendations of the workshop.